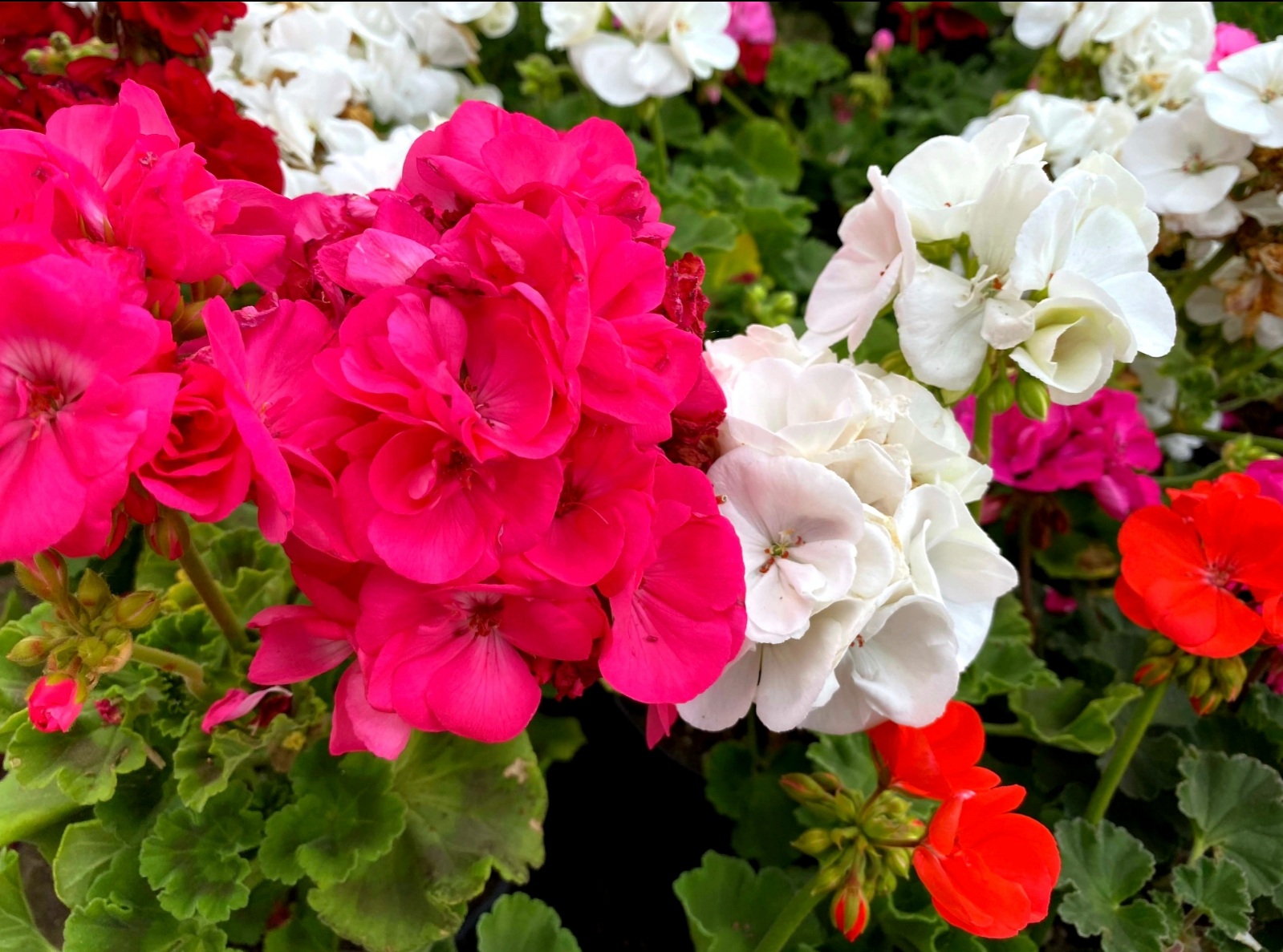 Our own indigenous beauties.

Most people know geraniums as those bright red, pink or white flowers commonly known in South Africa as Malvas. However, the geranium has a huge diversity of colours, leaves and flower shapes, sizes and growth forms. They not only bloom in red, pink and white, but also in many other shades such as violet, lilac, burgundy, apricot, orange and yellow, as well as a wide range of bicolour variants. 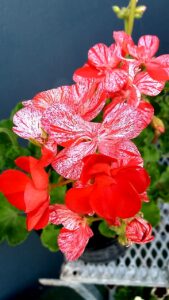 Several European countries consider the geranium an integral part of their culture and a symbol of their homeland. The Swiss have even elected this easy-care blooming beauty as their national flower. But, Geraniums are actually native of South Africa, and we still have more than 250 species of this indigenous plant growing in the wild. The first geraniums made their way to Europe in the 17th century, and soon after that to America.

The difference between Geraniums and Pelargoniums.
Botanically, only perennial geraniums are true geranium plants of the family Geraniaceae. The annual geraniums* — the ones you need to plant each year, really belong to the Pelargonium family, which means they're not actually true geraniums at all. However, modern botany classifies both as genus Pelargonium. 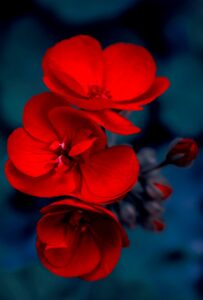 The naming problem occurred in the 17th century when the first pelargoniums and Geraniums were brought to Europe and were both called geraniums, due to their similarity. You will find that at most garden centres and nurseries across the world, they're all sold by their common name as geranium or botanical name Pelargonium. Whatever you want to call them, you certainly can’t call these South African beauties boring.

*It is worth mentioning, that even though Pelargoniums are annuals, on our warmer KwazuluNatal coastal climates, they can over winter in most cases with minimal effort and over here we tend to look at them as perennial.

Here are some of the more popular types of geraniums commonly found at nurseries. 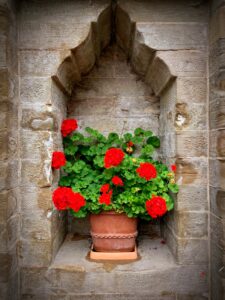 Zonal Geranium
These are the most common type of geranium, with sturdy flower stems topped with compact balls of blooms. The name “Zonal” comes from patterns on leaves that deepen as a leaf matures. Zonal geraniums open flowers in a rainbow of hues, including red, pink, peach, white and bicolour blends.

Ivy Geranium
If you want a geranium hanging basket, look for this type of geranium as they naturally grows in a trailing form. They are a perfect choice for hanging baskets and window boxes. Flowers open in a range of colours, including lavender, pink, burgundy, white and bicolour blends. 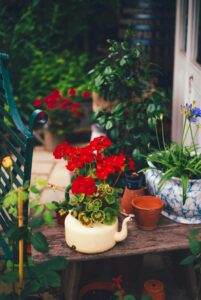 Variegated Geranium
Variegated geraniums up the geranium game by adding multi-coloured leaves to the plant. This is a type of zonal geranium that grows strongly upright — and as tall as 70cm. Leaves are often green and white, but can also have a trio of shades like cream, green and bronze. They look fantastic in containers, where you can see the colourful leaves close up. 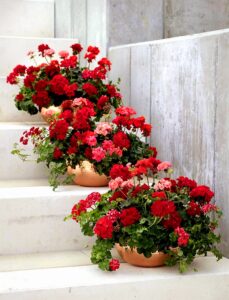 Hybrid Geranium
When you cross a zonal geranium with an ivy geranium, the result is called an interspecific hybrid geranium. It's like getting the best of both worlds in one plant: big, nonstop flowers on a plant with a full and mounding or slightly trailing growth pattern. These geraniums have great heat tolerance and fill planting beds and containers with strong colour. The more common varieties found at nurseries are Compacta, Calliope and Calliente.

Scented Geranium
This group of geraniums grow to different sizes, from 15cm to 90cm tall and excluding a few exceptions, are commonly found in their natural state. Scented geraniums with smaller leaves tend to be smaller plants, and offer a host of fragrances from citrus to lemon and rose.

While ones with larger leaves grow taller; and tend to have the more familiar citronella like scent. Older leaves have stronger fragrance than younger ones. At the slightest breeze or the lightest touch, these plants release their perfume. The citronella scent of the more common varieties, is believed to repel mosquitoes, insects and even snakes. Some geraniums even have healing power, and can help fight upper respiratory tract infections, including the common cold, bronchitis, and sinusitis. In traditional African medicine, geraniums are a main ingredient of the natural remedy 'Umckaloabo'. The essential oils in certain types of scented geraniums are also said to help alleviate depression and stress. 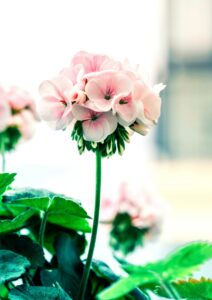 • Planting: Most geraniums crave sunshine. A full day is great except in the warmest summer months, where plants thrive with afternoon shade during the hottest part of the day. Ivy geraniums do best in light shade, especially as summer temperatures soar.

• Soil: Fertile, well-drained soil yields best growth. For geraniums in pots, choose a commercial potting mix. In planting beds, mix quality organic compost, rotted manure or pelleted manure such as Eco Pellets into soil to improve fertility and drainage. Your geraniums will thank you with lots of blooms.

• Fertilizer: Geraniums have big appetites. In planting beds and pots, mix a slow-release fertilizer into soil at planting time. Make a second application according to label instructions. Many gardeners feed geraniums with a liquid fertilizer such as Nitrosol or  Prescription Mix every 14 to 20 days, starting four weeks after planting.

• Pests: Aphids, slugs and caterpillars can attack geranium leaves and flowers, but damage is usually minor due to the repelling scent of some geraniums. These pests are easily controlled by handpicking or spraying insecticides.

• Disease Problems: Geraniums are prone to fungal diseases, which readily start on spent blooms. Remove dead flowers regularly, snapping stems off at the base. Do not toss them onto the ground beneath the plants; instead bury them in the compost pile. If rainy weather soaks flowers and you notice fuzzy fungus starting to grow on petals, remove any flowers that show mold, whether or not they're fully open. This keeps fungus from overrunning the plant. Help prevent disease outbreaks by giving geraniums ample air circulation. Don't crowd plants in beds, and keep pots in areas where there's good air movement. 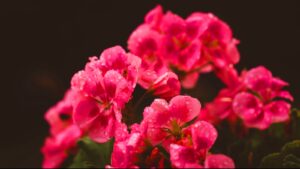 Hi, I'm Martin and I help with customer support. Is there anything I can do to help?